The long-term economic impact that the COVID-19 pandemic will have is yet to be determined. However, it is becoming evident that the recovery will vary widely across different regions. According to several recent articles, Tucson is poised to recover quicker than many metropolitan areas around the West. One of the reports, from Moody’s Analytics, lists Tucson as one of the top 10 cities best-positioned to recover from the coronavirus pandemic. 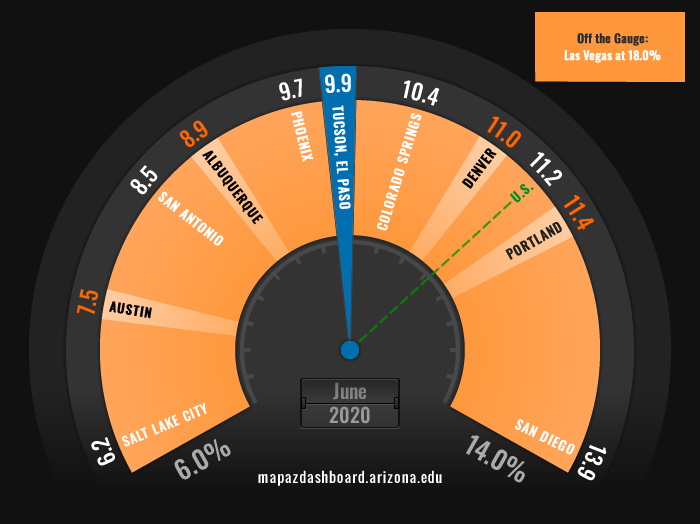 The Brookings Institution recently released the “Metro Recovery Index” which provides a snapshot of the impact that the COVID-19 recession has had on metropolitan areas. The index illustrates the impact of the crisis for each region compared to its pre-pandemic state for a range of indicators in three major categories: the labor market, the real estate market, and other economic measures. Brookings plans to update the index monthly.

At the beginning of August, the Metro Recovery Index showed that Tucson’s decline in the unemployment rate between April and May of 4.5% was the fifth largest among large metropolitan areas. Further, Tucson had the smallest percentage-point change of all metros in the unemployment rate between February and May. Figure 3 is an example of the infographics available on the Metro Recovery Index.

Tucson’s recession impact was low in several Metro Recovery Index indicators including those that looked at the change in total jobs, the median selling price of a home, and number of airport passengers from this time last year. Measures in which Tucson had a high recession impact relative to other metros included: job postings since February and the number of active home listings. The Index also tracks the current trajectory of these key indicators. Tucson’s unemployment rate, job postings, and median listing price were are all strong indicators when compared to other metros. Lendingtree found that Tucson posted the highest percent increase in Google searches for homes for sale among all metros. According to LendingTree, internet searches are one way to gauge interest in potential interest in home purchases.

Several additional national reports have recently indicated that Tucson is well-positioned for future growth. The Site Selectors Guild suggests that there is a trend toward suburbs and mid-sized cities for corporate expansion and relocations. Their recent news release listed Tucson as a strong candidate for new business location and/or expansion projects. Tucson is also a great place for those in the tech field according to a recent report on Business.org. They found that the median tech salary in Tucson was 220% higher than the average local salary.